So - who are you - the product of your DNA or who society labels you as? 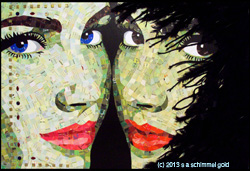 This is a new, original mosaic portrait I created in my "True, the Looking Glass" series.

In 1835, a schooner named “Peor es Nada” left one of the Channel Islands after gathering the the last of the surviving natives, the Nicoleño people. One woman was left behind. The accounts of the reason vary - perhaps her baby was not on board, or she went back to the village for a prized possession. Did she jump ship or just not make it in time? A storm arose, she had not returned and the ship sailed back to the coast of California.

Over the next 20 years, this Nicoleño woman lived alone on the island. She learned to make baskets from wild grasses, to fish, to hunt seal and otter and built a dwelling from old whale bones. She sewed herself a garment from cormorant feathers and seal sinew. She survived inclement weather, fought off wild dogs and alluded hunters and hostile visitors to the island.

Meanwhile, her people were sent the San Gabriel Mission in California, and she was all but forgotten.  Her people were absorbed into California and all aspects of their culture and language disappeared.

Eventually, Captain George Nidever landed on San Nicolas Island in 1853 and found the lost woman. She boarded his ship with her bone needles and a basket, wearing the feather garment [and not much else!]. She was taken to the mission in Santa Barbara.

Now, she was a ward of the Nidever family and the Mission. No one could understand her language, including Chumash Indians from other Channel Islands.

The lost woman was given a new identity - new clothes, a new name, a new religion - she was baptized Juana Maria [even though she did not understand what that meant] and something else - foods she was unfamiliar with. This new diet quickly made her ill and she died within seven weeks of her “rescue.” She was buried in an unmarked grave, used for "Indians."

The phrase “Peor es Nada” can be translated as “Better than Nothing” or “Worse than Nothing” - This portrait is my loose interpretation of this story of lost identity - the two faces of the woman - the ward of the glittering church with a fresh new identity - and the brave, wild native woman adorned in cormorant feathers. I’ll let you decide which interpretation of the phrase works best.

The medium used - recycled paper, paint, feathers, jewels and yarn. On canvas: 24x36” Due to the delicate nature of the medium, it must be framed behind glass. Please contact me for pricing.

If this story sounds familiar, a fictionalized version was captured in the book Island of the Blue Dolphins  and later into a film of the same name. If you have children, it is a wonderful, well-written story, albeit frightening for little ones.

The “truer” story of the woman can be found here.
Posted by Sandhi Schimmel Gold at 2:47 PM No comments: