My Appropriation Story...Biography and then some.

Old habits are hard to break, and even harder when YOU'RE old.

I am guilty of appropriation. But I vow... not in the future.
But how did I get here?

Here's the back story...

I could blame it on my revered High School Art Teacher, Mr. Levine. I loved him [not romantically]. He taught me a lot, but also some bad habits... including the DEADLY opaque projector technique.

I spent most of my spare time in High School in the Art room. Actually, spent some Chemistry, Geometry and Physics time in there, too. I was often fetched by a fellow student and dragged to class. My Math teacher, Babe Steen would just stand the hallway and yell - SCHIMMEL!!!! I only went to science classes [reluctantly] because Mr. Green was so cute. I would rather be in the art room than anywhere. But let us go back further...

When I was a very little girl, I was painfully shy. I started playing piano when I was 4. By ear. I have perfect pitch, and after my older brother's piano teacher left, I would walk over to the piano and play his lessons. My Mom was in the kitchen and thought Bob was practicing. When she realized it was me, she signed me up for lessons and immediately started thinking "child prodigy" and Julliard and the Ed Sullivan Show. Terror!

I also started drawing when I was little.
I would stay in my room and draw. For hours. I always drew people. Or clothes [on people] or shoes [on people]. I can draw. I learned on my own. Did not get much help later on except a few classes I took on my own. What an easy kid for my parents to raise. Piano lessons, practice [ick] and quiet hours alone drawing or reading.

My favorite books were [and still are] about people. I read every biography book in my school. Mostly about Native Americans.
I still read biographies. 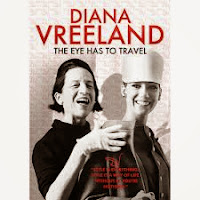 Left to my own devices [literally], I'll watch documentaries about PEOPLE.We went to the JCC in Reading, PA and I took lots of art classes. Ceramics was my favorite. I still have EVERYTHING I ever made, even if it's cracked or broken.

In 6th grade, I made a puppet. I put him a plaid kilt, and a Tam O'Shanter... I remember arguing with my teacher who insisted I had to decide whether he was Irish or Scots. What a bitch...how would I know the difference at 11? Now, on reflection...I'm thinking Scottish, I could swear it's the Black Watch tartan. I still have that puppet, too...molting away somewhere in a box. And now I know the difference.

In junior high, I really started thinking more about art and got great grades in drawing, and got an award for a portrait I did of my typing teacher [yeah... I'm THAT old]. Mr. Hobart really forced us to think outside the box... slapping metal rulers on the table and shouting "WAKE UP PEOPLE, it's the Pepsi Generation!"

I was not the "best" artist in school, that was Nancy Kintisch. And there were others. We were not in competition. The cameraderie in art rooms in high school was positive. But, encouragement on the home front was non-existent.

In the years between high-school and today... I bounced around colleges [4] and was an on-again off-again art major. I have to say, I learned very little in art class. One teacher I had for live drawing absolutely HATED me and ignored me all semester. At another college, one professor said "You know what you're doing, I can't teach you anything, just come back at the end of the semester with 12 paintings and I'll give you an A."
I was in a hard-edge acrylic non-representational phase for a while. But mostly, PEOPLE...always people. My degree is actually in Psychology [that's a long story about Eidetic Imagery experiments - on ME] ...but I did finish classes to get a BFA later.
Maybe I wasn't paying attention, or maybe it wasn't covered, but I never really learned how to BE an artist, how to make a living as a fine artist, how to get into galleries, or musuems, and I still don't know what a fellowship or residency is.
I'm not a joiner, and I need to learn things quickly. If I can't pick it up, I don't get it.
Well.. I got kicked out of graduate school since I could not pick a concentration. But, it was fun taking Textile design, and Surface design, and Metal work and Jewelry and Fiber Arts... even though I knew painting people was my thing.
And maybe fashion design...or shoe design...see, I'm still doing it!

So naturally, I went into retail. What a joke. But then came Display. Although I designed all sorts of things - from handbags to T-shirts to jewelry, my career in Display, Window Trimmer, Visual Merchandiser kept me alive. And fed the creative side of me. And painting on the side. Always painting.

Fast forward to the naughts. Frustrated in a corporate career, divorced, single parent... I decide to go get back into Art. After playing around with mosaics, I am finally SURE of what I want to do, a style, a technique I developed. Turning junk mail into tiles, and creating mosaics with them. Mosaics of PEOPLE. New husband, my angel, said quit your job and be an artist.
So, with an anthem to rock, we built a studio and never looked back.

Okay - it's gonna be people. What people? I scour through magazines and pull out photos. I paste them on my studio walls. I draw from them, I simplify, but... I am using photos from magazines for my subjects. Look, I never lied about it - it's just he way I worked. My whole vision was to USE those very objects - women's faces - and create something new.

My latest work is my last appropriation. The photo on the left is from W magazine, and is by Patrick Demarchelier. I loved this girl's face and the composition. So, I drew from it. I made enough changes that I believe it is "transformative," and the new piece has new elements I added...having started out thinking Tudor age then switched to a Renaissance feel. There she is on the right - in my messy studio. Either way, I am guilty of appropriation and that's that. 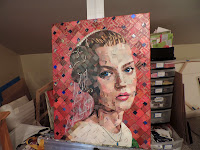 But now, I've decided to stop doing that. I have a lot of commission work going on through the next several months, but starting in the spring, I vow to create my own images and work from those.

In the spirit of letting go, I'm holding a clearance sale now through Christmas to clear out the studio and my head.

Looking forward to a new year and new direction. Cheers!