Did you know...
Emperor Justinian used relics and ornament he "stole" from Greek and Egyptian temples... including pillars from the Temple of the Goddess in Ephesus to create the Hagia Sophia in Istanbul?
And...
Constantine imported the obelisk in the Hippodrome from Egypt - the only column left in what is now a park.
Did you know...
The Crusaders stole relics, pillars and treasures - and brought them back to Europe - the horses adorning St. Mark's in Venice - and the Columns of San Marco and San Todaro were from Istanbul.

Ephesus, Istanbul and Venice are a few of the most spectacular places I've visited.
They are places that inspire me -

My mosaics - talk about upcycle - I take something of little or no value and create something of greater value... my artworks are made of tiny treasures pillaged from drawers of junk mail, calendars, old greeting cards and photographs.

Inspiration comes in many forms - and materials are transmuted into treasures [at least I like to think so...].

I have started a new series of large pieces - inspired by a bunch of personal touchstones: images and attributes of women, mosaics, Russian Icons, the Madonna [the original one, you know...a nice Jewish girl...] - this is not a spiritual calling, but I am approaching the series with a religious fervor.

I have been fascinated by religious images - without the spiritual attachment. I noticed today - I have four [count 'em, FOUR] images of Da Vinci's "Virgin of the Rocks" in my hallway. One of the first mosaic portraits I created was a self-portrait - and I gave myself a couple of halos [please do not read into that...I was just going with a Byzantine theme]. A couple of years ago, I created a version of the "Virgin of Guadalupe" just for kicks.

I also like shiny objects - and have been incorporating the gold foil and other metallics found in my collection of used Christmas cards into my work for a while now. Throw a little Klimt in the mix, too.

So, my new series of Icons begins with a portrait of a woman - I've called it "St. Catherine of Bologna, Patron Saint of Artists." Next, "Fashion Icon," and my newest piece "Rhythm & Hymn."
I am currently working on a gorgeous blonde angel. This might take a while... each strand of blonde takes hours to complete.

All of the large pieces are for a museum show coming up this fall - they are for sale, but will be on display through mid-January. However, I will create limited edition giclees [reproductions] of several pieces - and each giclee will be hand embellished and no two will be alike - much more affordable. For instance, "St. Catherine" will be about $7,000.00 - a hand embellished giclee [18x24"] will be $350.00.

And yes, I will also create some prints.

The allusion to personal demons? Let's just say there is a lot of crazy stuff going on these days! I think creating visions of womanly strength, fortitude and hope is a kind of therapy - if you know what I mean. Nothing beats time in the studio - pouring your heart on to canvas.

One more thing - OKAY, Okay - I will create earrings. I made some funky jewelry from some of my work - that I wore on Access Hollywood. I wear them for fun. Enough people have asked me to make and sell said earrings... I hear ya! But, if I am going to make earrings, they are going to be fabulous. So sit tight and I'll post info on my site and here as soon as I have a pair to show you.

S
Posted by Sandhi Schimmel Gold at 12:42 PM No comments:

Previous Lives leaking into this one? 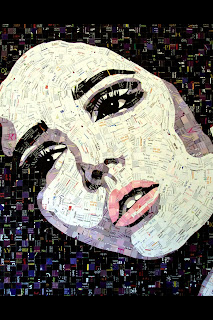 I had a recurring dream when I was in high school. The dream was in third person - Instead of seeing out of my eyes, I saw myself. I was an Italian soldier during World War II. I was young, handsome - in uniform. During a skirmish in St. Peter's Square -- "I" was shot in the back. Of course, at the time, I didn't know it was St. Peter's. As if it was a film, I saw myself falling / dying - toward the camera.

I was about to go overseas for the summer, and the dream seemed like a portent - an omen of doom. My friend Sharon & I were heading to Italy after a 2 month stint on a Kibbutz in Israel. When we arrived in St. Peter's, I freaked. That was the location of the dream [the converging lines, the colonnades. So, from that time on, I'm convinced that was a previous life.

I'm into some crazy metaphysical stuff - and had my akashic records read [stick with me]. In this reading, I found that another previous life had been lived as a nun who went into the convent against her will - and one who had taken a vow of silence. This is supposed to explain why I talk too much in this life.

This is just the tip of the iceberg of my weirdness... but as I posted my newest work on my web site, I noticed a theme... a Catholic Saint [from Italy], an Italian opera, an Italian painting... what's going on in my head?

I've always had a thing for images of the Madonna [the first one], golden halos, Russia Icons and women's 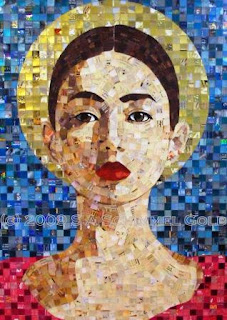 faces. So, I'm not surprised these elements are showing up in my work. And, the mosaic tradition continues.

I love opera - Italian, of course.
The most beautiful place on earth? Venice... and where I studied the amazing mosaics at St. Marks.

And, with eidetic imagery and art history hanging out together in my brain, artwork I've seen before is finding its way into images I create today.

So, there seems to be a theme happening...?! The newest piece is the beginning of a series of Icons. This one is "St. Catherine of Bologna - Patron Saint of Artist." The top image is entitled "Tosca" and look - I've done Boticelli's Venus 4 times! 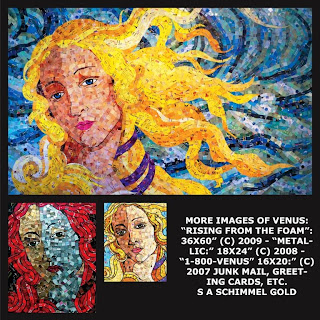 A little strange... my background is Hungarian, Jewish, New Yorker. Anyone in the mood for a nice seafood risotto?
Posted by Sandhi Schimmel Gold at 11:14 AM No comments:

Hey - did you see me in the June issue of Art Business News?

Hey - did you see my blog posted on Art Fair Calendar's Blog?

Apparently, I am featured in a new book - Ripley's Believe It or Not! "Seeing is Believing.” It officially comes out August 4 and will be available through all major bookstores and online.

I'm in for upcycling.

"All American Blonde" is featured... I just found about this yesterday - funny, I don't remember them asking for the image...?!

By the way, I am planning on heading to L.A. tomorrow night to audition for the reality show [think Project Runway, Top Chef] that Magical Elves is doing on Bravo. Wish me luck!
Posted by Sandhi Schimmel Gold at 7:50 AM No comments: