An ORIGINAL piece of my art FOR FREE!

Shipping to the 48 states will be FREE. Shipping to Hawaii, Alaska or overseas - you'll just have to pay shipping charges if they're over $25.00.

Why am I doing this?

I am so HAPPY to be making art, selling art and communicating with wonderful people like you.

What do you have to do to get the art?

First of all, you DO NOT have to buy anything... but if you do, your name goes in the pot.

So do any or all of the following and you might get a surprise present from me!

Oh, and by the way - if you win [and someone will] you can choose to send the art to someone for a gift!

Here's how:
At the moment, all I need is your email address or a contact method [Twitter, Facebook or email]. If you win, I'll need your shipping address.

Here's the link to my web page so you can see where I have shows, galleries, etc. 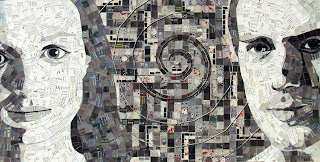 When you read the story of the Minotaur, there is a lot of focus on the monster and the hero...Theseus. Yes, Theseus was a brave young man, who faced an enormous challenge facing a man-eating beast. But it was a woman who saved the day.

Okay, but just how did Theseus escape? You may remember Ariadne, the daughter of the King of Crete - who demanded human sacrifices every 7 years.

When Ariadne got a look at Theseus, she made a deal - she'd tell him how to escape the labyrinth if he promised to marry her.

He agreed, she ran off to Daedalus, the creator of the labyrinth - for a CLUE - and he suggested she give Theseus a ball of twine - to tie to the door and unwind the twine as he wandered the lair of the Minotaur.

Sure, Theseus was brave, he had a sword as one weapon - he killed the beast and used another weapon to win the task - the CLUE - winding the twine back to the door where Ariadne waited.

Whaddya know, they lived happily ever after - back in Greece. Except for the part where his father threw himself off a cliff into the aptly named Aegean sea.

This newest piece is inspired by the myth of the Minotaur and how BOTH Theseus and Ariadne were responsible for the end of the human sacrifice at Knossos.

It is a myth symbolizing our struggle to escape spiritual repression - the twine represents inner guidance. We must find our own golden thread - keep to our path in order to defeat our own Minotaur... using the weapons of thought and intuition - spirituality and reason.
Posted by Sandhi Schimmel Gold at 1:13 PM 2 comments: